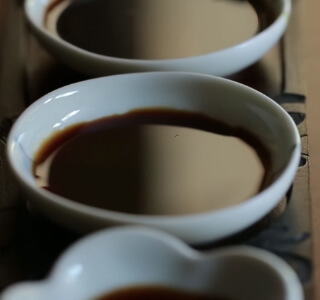 Barrel-aged soy sauce,
with the power of microorganisms

Yamaroku produces all of its soy sauce in kioke (3000-6000 liter cedar barrels). All fermented condiments are made by the power of microorganisms like lactobacillus and yeast fungus. Maintain the ideal environment, and they will produce the most delicious condiments. That's why it's crucial to use kioke and not plastic. It's extremely difficult to control the temperature in these barrels, requiring time and maintenance, but we still insist on using them today.

Even the barrels that look ready to fall apart are not really 'rotten,' but continue to house the important bacteria and fungi. It feels almost fuzzy to the touch.

A living brewery,
thriving with microorganisms necessary for soy sauce

The moromi brewing house was built over 100 years ago at the beginning of the Meiji Era, and is a Registered Tangible Cultural Property. A simple wooden structure with earthen floor and walls, it may look run-down, but that is intentional. The beams, walls, and floor contain over 100 varieties of yeast fungi and lactobacilli. In other words, this is the home of these microbes living here for over a century. The brewery is literally alive.

The walls are the life of the brewery, containing the most microbes. A priceless resource that cannot be bought. Any part of the wall that crumbles is mixed with new mud and reapplied to its original spot.

Shodoshima Island has a very Mediterranean climate, as the Seto Inland Sea's climate is warm with little rainfall. With little rain and lots of sunshine, the air is quite dry. Of particular note is the mountainous Kankakei Gorge. The tallest mountain (817m) of any island in the Seto Inland Sea, it absorbs heat and creates a warm, dry updraft. This unusual wind helps to nurture an ideal environment for microbial fermentation of soy sauce.

Yamaroku is located in Shodoshima Island's east side. We sit on the foothills over a bay at the mouth of Kankakei Gorge. The tallest mountains of any Seto Inland Sea island surround us, and the calm bay opens up to the south.

Generally, soy sauce umami is measured by nitrogen levels. Nitrogen is found mainly in the soybeans, so the higher the levels, the higher the umami. Umami compounds develop during the aging process, with regular light soy sauce at 1.2 and dark soy sauce at 1.5. Yamaroku's "Tsuru-bishio " soy sauce has an umami level of over 2.3, much higher than regular varieties of soy sauce.

Raising umami levels isn’t a difficult thing to do technically, though. No matter the quality of the ingredients or methods, flavorings can be added, more finely crushed soybeans can be used, and umami levels can be raised espite shortening the aging time. However, humans can detect unquantifiable subtleties in flavor like "richness” and "smoothness.” "Flavor” is a complex, holistic amalgamation of umami, spicy, bitter, sweet, and aroma that can't be measured just by numbers.

Compared to mainstream brands of soy sauce, Yamaroku’s numbers may look inconsistent on paper, but we feel that our product’s flavor is consistent. We cherish people’s sense of taste above pure numbers. We hold our standard to something more than numbers, we honor "deliciousness and happiness."